VISITORS PLEASE NOTE
Due to the limitations of time and space, for the moment I have decided to address, in detail, only a few of the major battles. Other battles will be progressively added and updated. If you have an account of a battle or engagement and want it published (providing it is historically accurate), please don’t hesitate to contact me

Introduction
The five battles of Belmont, Modder River, Magersfontein, Colenso and Spion Kop respectively, were all fought on the soil of British South Africa. That this would be an advantage in terms of morale and military manoeuvre turned out to be lofty presumption. Conventional military goals – the overthrow and occupation of the enemy capitals – were not pursued, but rather the relief of Kimberley and Ladysmith became the modus operandi of the British forces. Kimberley: a sorely-needed source of capital for the strained coffers of the Boer Republics; Ladysmith: a quick road to Durban for Boer forces, and more importantly, its seaport, dramatically increasing the chances of foreign intervention. The ramifications for British ‘prestige’ throughout the Empire of the fall of either of these towns were not underestimated by those in Whitehall.

At a basic military level, these campaigns were moderately successful. However, their impact on the war in terms of the subsequent change of official attitude was immense: the Boer forces were not tribesmen fighting on foot with antiquated weaponry. They were mounted and equipped with the latest rifles and artillery from France, Germany and England. Many of those in the commandos were veterans of various wars against tribes throughout the region. The battles waged after these campaigns were fought with these hard lessons in mind. These stinging episodes introduced the British army to modern warfare and highlighted the weaknesses of the enemy for the Boer forces.

Belmont
On the 10 November 1899, a skirmish took place near Belmont station and on 23 November, the first important battle on the western front occurred there. Close to the station a number of Orange Free State commandos under Commandant J. Prinsloo occupied several kopjes with the object of blocking the progress of the British forces under Lord Methuen, who was attempting to raise the siege of Kimberley. This was the first battle in which these commandos fought, and they were up against a force far superior in numbers and arms. The fact that the British had almost everything in their favour decided the battle. By means of assaults on the kopjes they succeeded in driving the Boers from them. The commandos then retreated northwards.

Magersfontein
After he had once more forced the Boer commandos to retreat in the Battle of Modder River on 28th November 1899, Lord Methuen was within sight of fulfilling his chief objective, the relief of Kimberley. His losses had been great, so he first waited for reinforcements. After they had arrived, he sent a strong force under the command of Major-General A.G. Wauchope on the night of the 10/11th December to drive the Boers at Magersfontein from their position. General P.J. Cronjé, who at that time was in charge of both the Free State and Transvaal commandos allowed himself to be persuaded to dig trenches – as planned by General J.H. de la Rey – at the foot of the ridges at Magersfontein. These trenches made his burghers invisible to the enemy. In the early morning of 11th December the British forces unexpectedly came up against the Republican positions. They were met by a withering fire on the open veld and suffered heavy losses. One of the first men killed was Wauchope. The British were unable to withstand the heavy fire of the Boers, and in the afternoon Lord Methuen broke off the engagement and took his badly battered regiments back to their camp at Modder River.

Colenso
This battle was fought on the 15th December 1899 during the first attempt by General Buller to relieve the besieged garrison at Ladysmith. The Boer commandos, led by General Louis Botha, had taken up entrenched positions on the kopjes on the banks of the Tugela. Buller and his staff thought the Boers were on the high ground much further back and with over 20 000 men launched frontal attacks. The British infantry, supported by artillery, tried to cross the river four times, but were driven back with heavy losses. They were also forced to tactically withdraw from ten big guns and empty ammunition wagons, in the hope that a fresh ammunition supply would allow them to be used afresh.

Spion Kop (Spioenkop)
In his second attempt to liberate Ladysmith, Buller wanted to bypass the Boer positions at Colenso from his left. His advance was so slow, however, that Botha had ample time to block his way. After the struggle had lasted for a few days, Charles Warren, who was in command of the battlefield, thought that he could break through the enemy lines by taking possession of Spion Kop. This resulted in one of the major battles of the war on the 24th January 1900. Botha’s snipers and artillery subjected the summit of Spion Kop to such a heavy fire that the position there became intolerable. Having suffered severe losses, the British abandoned the hill (one of the greatest blunders of the war) under cover of darkness and retreated to the southern bank of the Tugela. The Boers, who were also withdrawing, immediately reoccupied Spion Kop. 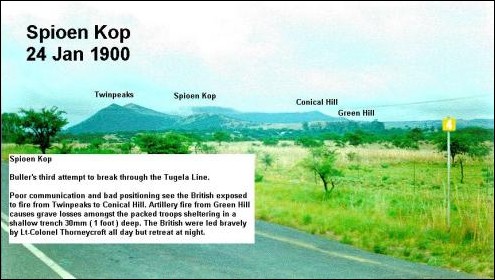 The following list is alphabetical not chronological. However, the dates are listed for convenience.

Bosbult [Boschbult] (1902)
Thirty kilometres from Ottosdal on the Delareyville road on the left side, stands the memorial that was erected in memory of the Battle of Boschbult on 31 March 1902. The actual battle took place approximately 500 – 1 000 yards west in the direction of Brakspruit.
Col. Cookson with his columns, a division of Kitchener’s forces, made contact on the farm Bospan with a commando of Gen. Liebenberg, who he had followed the whole morning. Liebenberg did not expect the attack and quickly moved to the front in a thorn-bush on the farm Boschbult where they took up position and stopped Cookson with severe canon and gunfire. Cookson took up position in a residential house and in a cattle kraal on the eastern side. With his Mounted Rifles and canons, and supply wagons, he also took up position in another residential house at the western side where a woman and children were. The rest of his force took up position at the southern side behind the low banks of the Brakspruit. The Boer force was soon supplemented with the commandos of Gens. Kemp, Celliers and Du Toit. A severe attack was launched on Cookson thereafter by Kemp and Du Toit, but due a misunderstanding between Kemp and Liebenberg, the last-mentioned did not give support and the attack was a failure and a checkmate situation occurred. When Gen. De la Rey appeared on the scene later the afternoon, he instructed the commandos to withdraw immediately as he was of the opinion that Cookson already informed Gen. Kitchener on Driekuil and that a relief force was on its way.
In reality Cookson had tried the whole afternoon of 31 March to contact Kitchener on Driekuil, but without success. Kitchener, who could clearly hear the canon-fire on Driekuil, moved in that direction with a force but turned around on the farm Doornlaagte (today Humanskraal) when he wrongly received the message from fleeing blacks that Cookson was taken by surprise by the Boer forces. Back on Driekuil he informed his head quarters in Klerksdorp that Cookson was defeated and required reinforcements. Col. Rawlinson with basis on Renosterspruit (at the other side of Klerksdorp) received instruction to move to Driekuil. The morning of 1 April Kitchener arrived on Boschbult with an enormous force and found that his information was incorrect and that the Boer forces had withdrawn the previous day. Cookson was out of danger. The afternoon of 1 April Kitchener and Cookson returned from Boschbult back to Driekuil where in the mean time, Rawlinson had arrived with a reinforcement of 3 000 men.
Losses on both sides were high. On the Boer side 40 men was killed or wounded and on British side 178. The losses of horses and mules due to canon-fire, seriously disadvantaged Kitchener’s mobility.
Written by and © P.J. de Jager, Ottosdal

Lichtenburg (2-3 March 1901)
The occupation of his home town offended General De la Rey immensely. On Sunday 2nd March 1901, he decided to end it. With a force of 1 500 men under Generals Celliers, Liebenberg, Smuts, Lemmer and Du Toit they stormed the town, occupied by a garrison of 600 English soldiers under Colonel Money. The attack did not go according to plan as Liebenberg went in too early, on horseback, not on foot as planned. The other commandos were not in position yet.
De la Rey came under fire on his way through the swamp. Celliers and Lemmer were wounded and their burghers retreated. Commandant Vermaas advanced to the middle of the town, but the retreating burghers left their flanks open and De la Rey had to attack again to support them. Under the cover of night De la Rey retreated when it became clear that he could only free the town with severe losses. After the attack Money, vindictively, had all the willows in town axed. 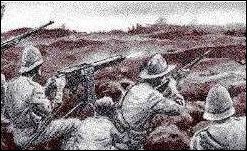 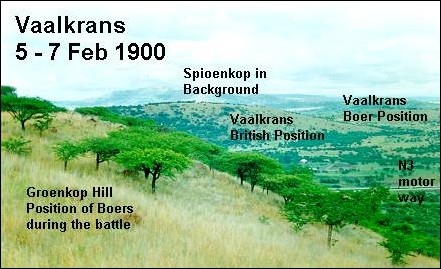 Vaalkrans as of 2002 (image courtesy of P. Griffiths)